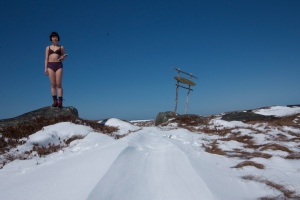 After a 24 hour or so journey, 8 hours in Halifax airport where I didn’t visit the live lobsters, and overnighting at Gander – Crossroads of the World airport – I arrived on Fogo Island on Tuesday morning. En route I met a lovely lady, Mel, who I cannot find on facebook as there are so many with your name! Mel, if you see this, send me a message!

Anyhow, this blog post came about as I started making some notes about my first day and then continued to write about the trip in a simple way for some friends.
My Instagram page on facebook shows some photos: https://www.facebook.com/media/set/?set=a.10151776841325313.851368.561695312&…
Tuesday: I finally arrived and I AM SO HAPPY. It is pretty much idyllic here and I have been hungry for Lucy’s company for months (she’s been here since November, and before that, Poland, but I hardly ever see here even when she’s in London).
So I got in and had an early lunch, some napping, then we went in to The Film House to so some tech testing for tomorrow’s event. It’s quite complicated even though Skype is meant to be straighforward, with multiple live Skype lines, cameras, and set ups. Basically, one of the three scenarios tomorrow will involve audiences in Fogo and Toronto controlling their ‘mice’ (I will be dresses as a mouse with a papier mache head) by telling us what to say to each other. It’s an investigation into remote communication and the creation of space and culture via words and technology. I am not explaining it as well as Lucy can, I don’t think. After tomorrow, we’re going to catch up and brainstorm about her Edinburgh residency here: http://www.rhubaba.org/about
The event is with Cressida Kocienski who is an English woman currently running a space in Toronto. She seems pretty awesome in so many ways. http://www.cressidakocienski.blogspot.ca/
I saw a herd of caribou. Very leggy! Almost like wolves, from a distance – rangey.
The sea is across the coastal road in front of the house. There is ice hugging the beach – a combination of the sea freezing over and ice broken off from icebergs. There are two bedrooms, two bathrooms, a super shower, and a fairly open plan living space. This typs of house is called a salt box house. Everything is charming. The welcome pack for the house says, “John Henry Coffin, who was a fisherman on the island, once owned Coffin House. He also ran a convenience store across the road.” It’s been very well restored and just top notch. The Fogo Art Corp keep Lucy’s sheds full of wood for burning, and there’s equipment for all the artists to use and make things with. Lucy is one of four artists who are given residencies here. Everyone seems lovely so far. What’s the underbelly of Fogo like?
There’s places called Joe Batt’s Arm, Seldom Come By, and Tilting. We are at Joe Batt’s Arm.I have been drinking blueberry wine this evening, a “sipping wine”.My papier mache mouse head is really scary. Like a weird Mickey Mouse, which is intentional
Wednesday – Show day.
Here is the report on the event on Wed that I performed in, including film footage:
http://www.verachok.com/mice-in-the-house
Post-show, Lucy helped me tweak the film I made for my writing class. I LOVE IT SO MUCH.
Thursday – the Day After the Show and we pottered round the house and then ventured out at 3pm.

This studio, here is an official shot: http://design-milk.com/fogo-island-artist-studios-in-canada-by-saunders-architecture/ is where we were headed to. It’s Lucy’s studio and is on the edge of the sea, which at the moment, is rough and stormy. The ice hugs the coast and goes out say, 400m and beyond that the white-tipped waves crash.

We celebrated Lucy’s day off by hosting movie night. There is no cinema on the island and so we made a projector screen and had a couple of pals round to watch Django, which was very engrossing and entertaining. Why do we like violence like this?

Lucy baked sweet potatoes in the stove oven and we had moose – actual moose – to eat with it. It tasted like beef? A strong type of beef. Nothing wild but the novelty of it was fun.

There are too many things about this adventure that I’d like to tell you about and share with you. When I get back to London I hope I don’t forget the wonderment of my being here. But it will have rubbed off and there’s no point in going “Oh, on Wednesday I saw this very cute sock knitted by the local ladies” two weeks later! We did go to the crafts day at Winds and Waves and I did buy cute socks, just to have something. The ladies had just finished making 3000 little hotel rooms aka wooden boxes (a little bigger than A5 size base) which will go out to tourist boards and key people, as part of their marketing for the hotel here which still hasn’t opened. Each box has a keyhole you look into and a lit up view if you point it at the light. It has a miniature crocheted rug and a miniature quilt over the bed. 3000!

Anyway, walking to Winds and Waves was difficult due to the blustery wind so we hitchhiked. Lucy says that everyone stares and notices strangers (of course) and that walking is madness (you really have to have a car here). Someone recognised her and picked us up for the 3 min drive (20 min walking struggle). It’s not really cold here – I mean, wearing a couple of layers and walking was enough but the silly toggles and things of my borrowed clothes just didn’t work so I was struggling, agh.

Happily, on the walk back in the opposite direction, the same guy saw us again, but not after a good walk round the bay during which my face was whipped off by the wind! It’s actually quite painful as the icy water slams into our faces constantly! You kinda have to have a mask.

The lovely man dropped us off – there’s no road to the studio – and we then had to walk again for 15 or so minutes, this time on the exposed coast. I can’t quite believe that Lucy was doing this through winter! I mean…it’s really nuts and if it’s just snow you’re walking on then it’s fine but ice is pretty difficult, and you’re pretty much in the middle of nowhere if you fall over!

The studio is massive and stands on its own. They have tampered with the architect’s vision as it’s impossible to heat the whole large thing so there is a temporary wall up at the end which faces the sea. It’s super eco-friendly, with solar powered everything and a compost loo and all. There is also a strange door in the wall which opens out straight onto the drop to the rocks below!

Lucy has made it really cool and it get very cosy very quickly with the stove and its entirely possible to live there. In the summer it’s meant to be gorgeous. I spied a PICNIC table 200m down the ‘beach’ and a lady who popped in to say hello is a guide and storyteller and she says there’s a flat rock that extends out to sea which they picnic on in summertime. The island would be extremely lovely in summer.

Jealousy – she has a two bedroom standalone house on the sea and the massive studio on the sea. Life seems pretty quiet and pleasant, equipment is available from the organisation – loads of macs and Bose speakers – and the heating is on constantly at 20C which is divine. I am much toastier here than in England which is a joy! I am eating healthily as Lucy is super healthy, but seem to have expanded anyway – can’t get into my jeans! Ack!

Anyway, I haven’t told you about the event yet but I have to press on with other stuff today. It’s my first day back at my desk, as it were and want to reply to emails and carry on organising my life! I think Lucy is uploading footage of the evening and I will tell you about it when the footage is also available.

One last thing I would like to show you is this, the very first film I’ve made. It was for writing class tonight. I chopped up some text written by my collaborator and taught myself how to do basic editing on Tuesday. Lucy helped me at 1am on Tuesday with the audio. I quite like it and you might too:http://www.verachok.com/princess