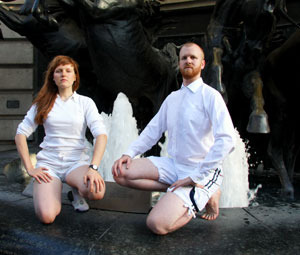 Today I spent at the BFI watching the feature film, The Inspection House, a creation of Lucy Pawlak. Lucy is one of the most intriguing, intelligent, fun people I know. She also one of my favourite artists. By some stroke of luck I got to work with her on the St Unicorn’s Trust project for Alma Enterprises in Sept 2009 and started work with her on Samsonov soon after.

So many things about today were super. I think what stood out for me is that we got to Skype with Lucy who’s on a residency on Fogo Island, a small island off the coast of Newfoundland. What’s so special about Skyping someone? Well, it was a live reminder of why Lucy is so special, really, seeing her joking about, asking to be sat on Adrian’s knee, and telling us about the sea freezing over. She also wore a fabulous yellow hat.

I am interested in the seeming conflict between art and comedy. Today’s screening was part of the LOCO Artists in Comedy Film Festival and there were a few great points made about comedy – particularly from Aimee Neat, Doug Fisbourne and the guy who made the Creativity animation whose name I don’t know – and why artists or experts in art sometimes react so badly against art being humourous. I am also askign the question about happiness in art and happy artists.

I am so very pleased to have been a part of the process and to be a part of the Samsonov Family Collective, and such a pleasure to have, since meeting Lucy, brought together Charles Adrian, Catriona James, Mian Rahman, Almira Bekkulova, Sarah Le Fevre, Krystian Godlewski, Andrew Morrish, Francis Moore and Gloria Sanders.

See some early filming below. Can you spot me? It was great, running about in the woods, racing against the sunset:

This is an even earlier one, performed entirely by Lucy, before I met her:

Lucy’s reel showing snippets of the St Unicorns Day (created with Adam James) at 5 mins 52 secs in. Beyond the event, there existed St Unicorn products including instructional videos in fitness and music.

I love this video collaboration with Marenka Gabbeler.

There’s another incredible video by her but I can’t find it online anymore, but here is her youtube page.