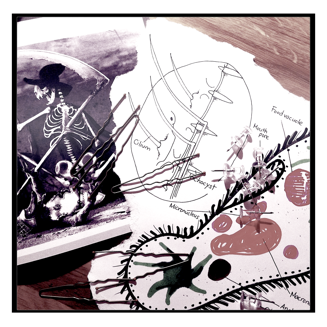 I created the image above for a piece I directed last year, Mamet’s All Men Are Whores. Details of the production here. If you can, read it, watch it. It’s great. Very Wallace Shawn.

“If we could reproduce like paramecia do you think that we would not?”

“And so we will do anything for some affection”

– Mamet, All Men Are Whores

I love this! #VeraAndAdrian veraandadrian.com
First rose in the garden this year
Posted @withregram • @doodleubi While my human parents did a quiz, I behaved beautifully by not in any way chewing an oversize limited edition copy of Oscar Wilde’s collected works. Nor did I nibble an important work of philosophy, Bees.
Do I look dignified in this? Pineapple outfit makes a second public appearance. I find dressing up as fruit cheers up everyone. Tonight was the first Murphy family pub quiz via Zoom. I didn’t know any answers to do with Harry Potter apart from “Robbie Coltrane”!!! BTW FYI Dom is wearing @doodleubi’s leopard print blanket hamster style in the first pic. By the end of the evening he’d gone semi-pineapple. Because I made him.
Everyone follow @lendandtend and support lovely garden shares and seed exchanges! Look what I got in the post!!!
%d bloggers like this: