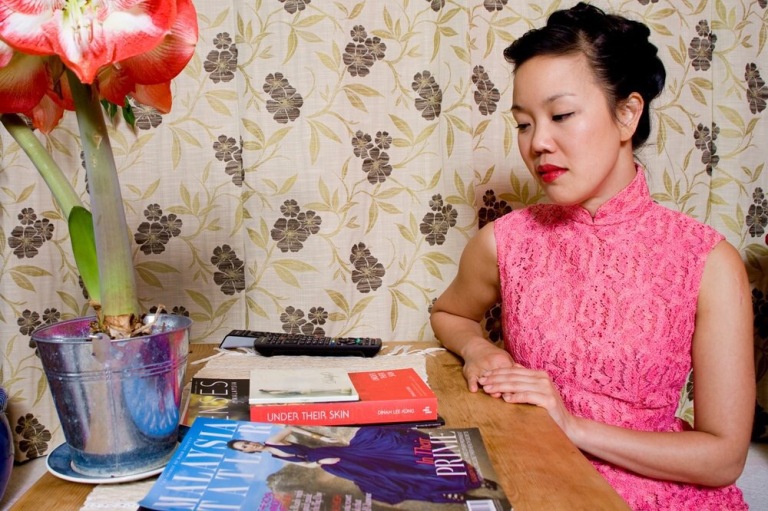 Excerpt from an article in Rookie by Jenny Zhang which reminds me of my project, My White Boyfriend is Better Than Yours, coming soon.

““Across the Sea” opens with Rivers Cuomo singing:
You are

Who live in small city in Japan

And you heard me on the radio

About one year ago

And you wanted to know

Listening to the song now, for the first time I realize he’s trying to imitate the broken English of the Japanese girl who writes him by omitting the “s” from “live” and the “a” before small city, unable to imagine that this girl does not likely think in broken English, but more likely exists as someone who thinks and speaks and functions in fluent, grammatically correct Japanese.
When I was an undergraduate, I read the short story collection A Good Scent From a Strange Mountain by Robert Olen Butler. He was hailed the “the master of the short story form” by my white male creative writing teacher whose ideas I challenged constantly. One of the stories in the collection, “Fairy Tale,” is told in the first person from the perspective of a naïve Vietnamese prostitute who falls in love with an American soldier who promises to love her and take her across the sea to the U.S. and marry her and give her the good life. Ultimately, he’s a shit husband and she divorces him and goes back to being a prostitute but remains optimistic in her advancing years. The whole story is written in broken English as if this Vietnamese woman would tell her own story in her own head in broken English and not in perfectly fluent Vietnamese. The failure of imagination is on the part of the white male author, Robert Olen Butler, who cannot see this woman the way she would probably see herself, even as he appropriates her voice and what he imagines to be her inner world.

No, my peers and my teacher argued with me, he’s just trying to capture how she would have appeared to us, an American, non-Vietnamese speaking audience. But aren’t there also Vietnamese-Americans? I shot back. I’m American and I don’t see her this way. I was the only person of color in that class and everyone laughed at me, at how uptight I was, at how I always found something to criticize when it came to matters of race. I didn’t say anything more on that point, but I did wonder if somewhere there was a book written by a Vietnamese woman who writes from the first-person perspective of an American soldier, and tells his story in broken, embarrassingly bad Vietnamese. Except that story likely would not exist because that white American soldier likely would likely only speak a word or two in Vietnamese, if at all. So his story would just be 12 pages of blank white space. He would be silenced altogether by his illiteracy, his inability to communicate at all in any other language besides English. Imagining that gave me pleasure for a moment, I guess, until I realized that A Good Scent From a Strange Mountain won the Pulitzer Prize and was almost universally praised for its depth and insight into the Vietnamese experience, for “making the Vietnamese real.” It always takes a white man to make the subaltern finally real. What about a book about the Vietnam War written and told and framed by an actual Vietnamese person? Would that ever win the Pulitzer? Would it even get published to any acclaim?
I guess this is a long way of saying I have to speak for myself. I have to tell my story. If I believed that I was who other people imagined me to be, I would be a broken woman speaking in broken English.
I guess this is a long way of saying I was never the girl in that Weezer song. Some people have wanted me to be and I have gone along with their fantasy of me, but that’s all it ever was: someone else’s fantasy of a girl.
I want to be clear that this is not an universal condemnation of interracial dating. It doesn’t make me or any girls of color a hypocrite for both wishing to be seen as three-dimensional and as their own subject, while also wanting to date a white boy.”